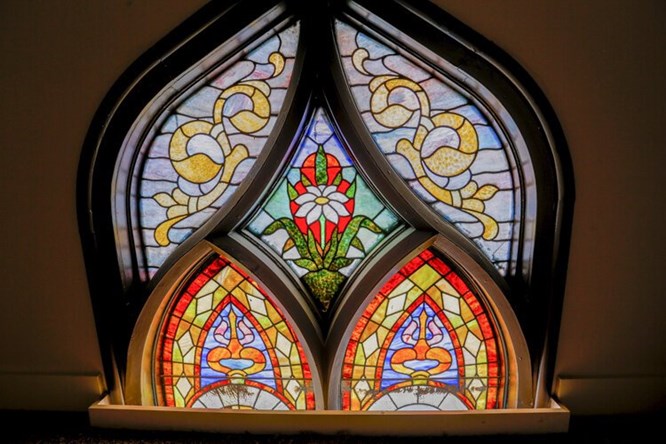 For 135 years, the brick Zion United Church of Christ building has towered over Tremont, with its 175-foot steeple, ornate stained glass windows, and a history steeped in German immigrants settling in Tremont in the late 1800s.

While Zion UCC at one time saw membership as high as 1,500 in the 1885 building, the congregation has dwindled to just a couple dozen members today. In 2017 Zion UCC decided to sell the church and adjacent school building for development.

Three years later, Zion UCC, 2716 W. 14th St., is now San Sofia Luxury Apartments (named after developer Dan Siegel’s wife, Sofia Lucaj, who did much of the interior design). There are 25 one- and two-bedroom apartments and lofts, with twelve units in the church and 13 units in the school building.

The old Zion United Church of Christ, now San Sofia Luxury Apartments.Siegel, of Beachwood-based Integrity Realty Group and Andrew Brickman of Brickhaus Partners in 2017 jumped at the chance to reinvent and repurpose the historic church and school into luxury apartments.

The developers then got to work—completing the project in July. In August, the first tenants started moving in.

The team preserved historic elements of the church buildings, while implementing all the modern amenities tenants want, says Jeffrey Gold, director of marketing and revenue management for Integrity.

“I love that we have been able to repurpose the church and school in a manner that retains the buildings and the congregation as a part of the neighborhood, while brining additional residents to Tremont,” says Gold. “I am excited to have residents living in the newly re-imagined spaces.”

Cleveland-based urban architecture firm Arkinetics was charged with blending modern style with the historic nature of the two buildings.

Every unit on the second and third floors of the church has stained glass in the bedrooms, says Gold, and the ornate glass has been preserved or repurposed. For instance, in an upstairs hallway, John Abbott of Arclight Glassworks created stained glass backlit panels along a handrail, which complement the original light fixtures that have been kept in the hall.

Perhaps what excites Gold most is the two-bedroom, one-bathroom 1,005-square-foot apartment in the bell tower of the church. The two-story unit, with a 66-step climb to the second floor, has plenty of natural light from windows that open, yet also retains some of the original stained glass, a spacious living room, immense kitchen with a 15-foot island, and original church column capitals.

The largest stained-glass window—measuring about 17 feet tall and seven feet wide—extends from the church's first floor into the hallway of the bell tower apartment. “It’s one of the most amazing features we were able to maintain in correlation to the apartments,” says Gold. “It’s probably the most unique apartment in all of Cleveland.”

Gold says the yellowed plexiglass that protected the exterior stained glass has been replaced with new panels that won’t yellow and will help with conserve energy.

The column capitals are featured as a decorative flair throughout the units and public areas, which modern amenities include high-end appliances, integrated washers and dryers, granite countertops, vinyl wood plank flooring, and smart technology through an app to control locks, individual zone heating and air conditioning, and lights.

‘For a building built in the 1880s, we’ve brought all of the systems up to today’s standard,” says Gold.

The original wooden doors in the church nave now open to the San Sofia lobby, and the team has recreated the original paint work on the altar ceiling, using historical photos as reference.

The team worked with the Cleveland Landmarks Commission to ensure proper preservation of the buildings, but Gold says maintaining the original work was not always easy.

“Being an historic building, you find things as you go and it extended the amount if time it took,” explains Gold, adding that the team just finished the last piece of the project this week. “A window had to be specially-manufactured and the sanctuary was closed for a while.”


Integrity Realty has created a private courtyard between the church and school buildings. And 44 secure, gated parking spaces are available for $75 per month.

Gold says seven of the apartments are now occupied, and he says he is eager to see new tenants embrace the combination of Tremont history and modern amenities.


Gold says the remaining Zion UCC members will continue to operate out of space in the school.

“We revived the best of the church and the school and really repurposed it for the way people want to live today,” says Gold. “And, hopefully, we’ll save it for another 100 years.”