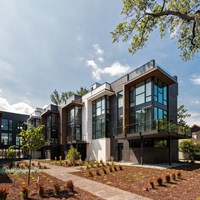 95 Lake, the Brickhaus Partners luxury townhome development across from Edgewater, was recently used in the filming of a new movie which will be released in 2019. The owner of the residence used in the filming was initially approached about a bike commercial, which never came to fruition.

This was not the first time a Brickhaus development had been scouted to be a site in a major movie. In 2014, one of the riverfront residences at Eleven River, the iconic development in Rocky River, was used as the home of Kevin Costner and Jennifer Garner in Draft Day. Costner played the fictional general manager of the Browns. The film went on to be a critical success. In 2015, With This Ring, a romantic comedy starring Regina Hall, Jill Scott and Eve, utilized 95 Lake as a backdrop.